People who spend money on self-guided personal growth and development programs/workshops/experiences are likely to be female Millennials based in the U.S. or North American region. Their preferred social media platforms are likely to be YouTube, Facebook, and Instagram. Below is an overview of the findings.

To provide the required demographic data, the research team searched extensively through the public domain for any data from media resources, industry experts, market research reports, credible surveys, and statistics resources. However, while there was some data that could be used to provide U.S.-specific demographic information, there was none for the global scope.
The research team also explored the available reports on the Personal Development Market published by GrandView Research, PRNewswire, VMR, and Market Data Forecast. We looked at the companies featured in the reports, and checked for any information on their customer demographics that would be helpful in our quest. However, we could find no such information. Therefore, the research team has provided the age and gender for U.S.-based consumers as proxies for the global data. We believe that this would be closer to the overall data since the U.S. makes up almost one-third of the global market, based on the statistics provided above. For the 'Geography' section, we have provided the global regional distribution since it was available.
Part
02
of three
Part
02

According to the previous research, the typical demographic for a self-guided self-help consumer is a female millennial living in the US or Europe. Therefore, this is the demographic for which we have provided a psychographic profile.
Millennial women are social, but value their unique identity. They value authenticity and convenience. When purchasing, they are most concerned with price and quality, and tend to plan their purchases.

Most self-guided personal development programs/workshops are offered in the form of courses on top education platforms. The classes are free of charge, save the inclusion of verified certificates that require payment (ranging from $20 to $300). Nonetheless, the cost of popular programs ranges from $20 to $538. 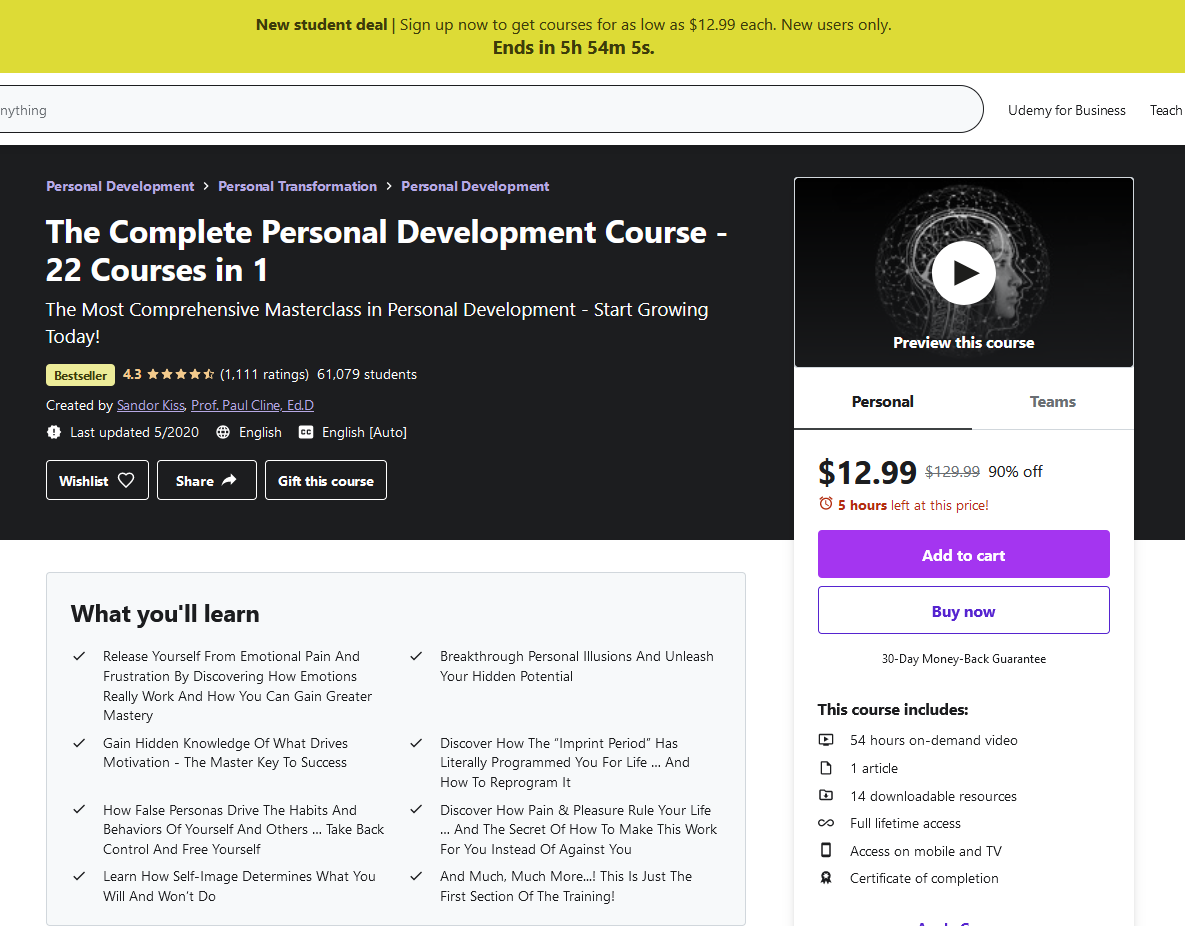 The research team examined user plans' average price estimates on self-guided personal development programs. This search was done leveraging reputable and popular blogs and news outlets (such as Addicted 2 Success, 4 Hour Work Week, and Thrive Global) in the personal development industry (and in general). Many articles focused on program comparisons, program reviews, and top habits to develop; pricing comparisons were not detailed. It was also discovered that people who pay for self-guided personal development programs usually opt for individual development courses and other online education platforms such as Coursera and Alison.
Alternatively, the team carefully analyzed the social media platforms (including YouTube, Instagram, and Twitter) of trusted influencers (such as Gary Vaynerchuk, Tim Ferriss, Brené Brown, and Eric Thomas) in the space for membership and payment plan details of popular workshops. Several posts were program comparisons, program reviews, and program walkthroughs. However, a few were pricing comparisons or estimates. Nonetheless, this provided more leads to the general pricing range and popular programs.
Next, popular personal development programs/workshops were identified, and their pricing details were meticulously analyzed. The focus was on self-guided options. Therefore, the team made and carefully summarized an in-depth pricing comparison covering a wide variety of plans.

The $10 Billion Self-Improvement Market Adjusts to a New Generation

$11 Billion Self-Improvement Market Is Growing, But Has Its Critics

Millennials, Here’s Why You Are Addicted To Self-Improvement

Why Lifestyle trend self care is a biggest concern for the Millennial in 2021 ?

This graph tells us who’s using social media the most

Millennials Want Jobs And Education, Not Marriage And Kids

What Drives Millennial Women to Spend

Why the Self-Help Industry Is Dominating the U.S.

40% of Millennial Women Say Instagram Is the Best Way for Brands to Reach Them, Per Bustle

Millennial women: How to woo a new generation of employees

Personality Traits of Millennials: How to Market to this Generation

Personality Traits of Millennials: How to Market to this Generation

8 of the best online courses for personal development

MOTIVATION - Power Guide To Motivating Yourself & Others | Alison

The Science of Happiness at Work