According to a Redfin report of over one million visitors to their website searching for homes across 87 metro regions in the United States between April and June of this year, locations within or near Phoenix, Sacramento, Las Vegas, Austin and Atlanta are the most searched (smaller) metro areas. Data shows "a record number of people from the country's largest metropolitan areas, including New York City, Los Angeles and San Francisco, are flocking to smaller, more affordable cities amid the coronavirus pandemic." Prior to the current pandemic, Millennials, in particular, were noted as looking for more spacious luxurious offerings in more rural settings; this after they (generally) led a movement to large cities like New York and San Francisco. William Frey, a demographer and senior fellow with the Brookings Institution, noted this reversal of Millennial migration movement. But not all of the most recent data points to a deliberate exodus to the suburbs, exurbs, or rural areas. Most industry experts believe the current trend is merely an onset of a movement away from large cities for luxury residential buyers, but almost all agree it is simply too early to be certain. 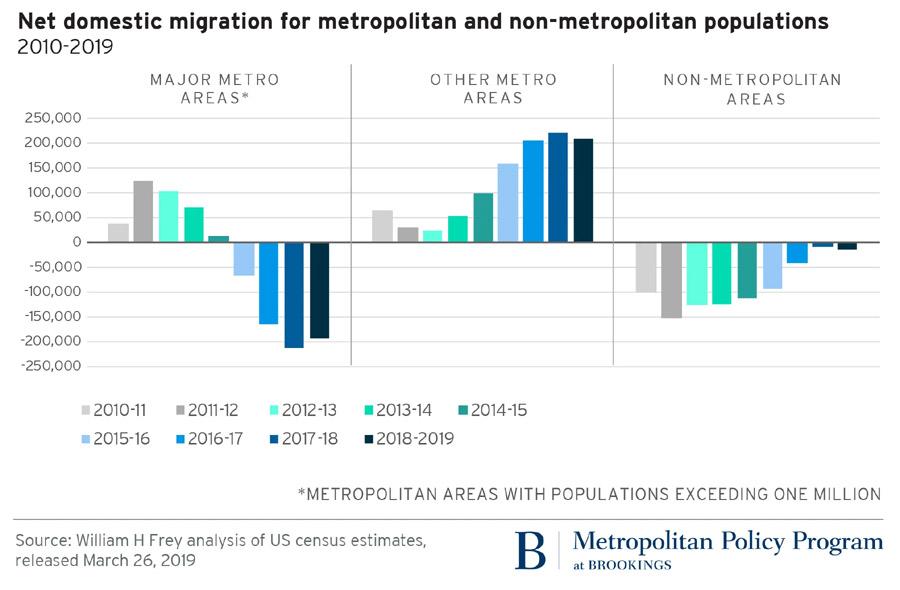 From the NorthEast, New York City, to the Burbs and Beyond

No area in the US has received as much press about an exodus of its wealthy residents as New York City. While the immediate exodus may have been temporary initially, reports point to a more permanent trend as the pandemic continues.

Very little has been written about wealthy Canadians leaving cities due to the Coronavirus pandemic.

Investigative research yielded plentiful sources addressing the proposed exodus of wealthy home buyers from large city centers towards the suburbs, exurbs, or even rural locations. These sources mainly address two of the more prominent and news-worthy metropolitan areas: New York and San Francisco. Very little evidence was found concerning most of the specific cities identified in the initial research, However, many are located in or adjacent to large metropolitan areas, thus the material of this research applies.
Research into a specific exodus of wealthy people from Canadian cities did not identify any recognizable trends other than the 2 articles included in the Canadian section above. Aside from national research across Canada in general, all large cities were researched individually.

All These Stories About People Fleeing Cities Are Total Nonsense

Should you flee your city? Almost 40% have considered it during the pandemic

The Wealthy Are Leaving Cities For Good

The Great American Migration of 2020: On the move to escape the coronavirus

De-Urbanization: Are Americans Fleeing Cities in the Wake of COVID-19? | SparkRental

Coronavirus: Wealthy New Yorkers flee Manhattan for suburbs and beyond

America’s Biggest Cities Were Already Losing Their Allure. What Happens Next?

Smaller U.S. Cities to Get Building Boost from Coronavirus Outbreak

Record number of NYC, LA and San Fran are moving to smaller cities

Why we shouldn’t all move to Montana after the pandemic

It’s All About The ’Burbs: In A Time Of Pandemic, More Young Families Are Fleeing The City For The Country

Rich Torontonians Eyeing An Exodus From City After Pandemic: Agency