Generally, an increase in student engagement increases student retention and vice versa. Data, information, and statistics to support this link between engagement and retention can be found below. 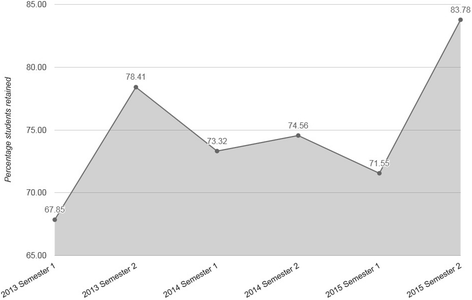 Statistics on a Reduction in Engagement

We were not provided a geographic focus for this project, so we assumed a broad approach and looked globally. We did not find sources with numerical data that could provide the requested information in form of 'increasing engagement by X results in Y or decreasing engagement by X results in Y.' This is probably because engagement is hard to quantify. We did find clear data linking engagement to retention and provided actions or initiatives that have been taken or that are in existence that increase or reduce student engagement and in turn affect retention (persistence, continuation, and graduation) in higher education.

Building student engagement and belonging in higher education at a time of change: final report from the What works? Student retention & success programme | Advance HE

What Is Student Retention in Higher Ed? | USC Rossier

Academic Engagement and Intention to Drop Out: Levers for Sustainability in Higher Education