SMEs in the MEA

Early FindingsSMEs in the MEA
Part
01
of twelve
Part
01

Key financial/business needs for small and medium enterprises in Egypt include access to credit services and export support.

The most recent statistics on Nigeria’s small and medium-sized enterprises published by the National Bureau of Statistics is from 2017. Based on the report, there are 41.5 million Micro, Small and Medium Enterprise (MSMEs) in the country, out of which 41.4 million are micro-enterprises, 71,228 are small businesses, and only 1,793 are medium enterprises. The 5 key industry segments in Nigeria that have the largest share of MSMEs are Wholesale/Retail Trade, Agriculture, Other Services, Manufacturing, and Accommodation and Food Services.

The five key industry segments in South Africa that have the largest share of small and medium enterprises include 'Wholesale & Retail', 'Community and Social Services (CSP)', 'Financial', 'Construction', and 'Manufacturing'. We have provided below a detailed overview of the micro, small, and medium-sized enterprises in each of these industry segments.

By the end of Q3 2019, there were approximately 572,615 business permits in the United Arab Emirates. Of these, GO-Gulf calculates that 95% were micro-, small-, and medium-sized businesses (SMEs). Broken down by size, approximately 72% of all business in the UAE are micro firms, while 18% are small businesses, 5% are medium-sized businesses, and 5% are large enterprises.
Although a few pre-compiled sources were located that ranked the top enterprises by number of businesses, they appeared to be slightly outdated and/or did not include the entirety of the country. Many provided values only for Dubai and Abu Dhabi, as these two cities alone account for 70.6% of all businesses in the UAE. As a result, in order to provide the most accurate data for the entirety of the country, we used triangulation to provide a more exact estimate of the top rankings by industry and number of businesses. In addition, we did locate one source from the National Economic Register of the UAE Government, which appeared as though it contained this data pre-compiled and broken down by industry and number of businesses. Unfortunately, we were unable to access this source as a result of a security firewall. Just in case it is accessible in another manner, this source has been included as well.
Below is a ranking of the top 5 industries for SMEs in the United Arab Emirates based on the total number of businesses in that segment. From there, a breakdown of the estimated number of micro-, small-, and medium-sized businesses within each industry have been calculated, as well. The values obtained via this method appeared to be more accurate than those identified in the pre-compiled sources that contained data only for Dubai, Abu-Dhabi, or older records for the country as a whole based on the fact that they are larger and justify the mentioned growth rates in other sources.

There are over 3.8 million small and medium enterprises in Egypt, with the majority of them (85.4%) being micro companies with less than 20 employees. The five biggest SME sectors include manufacturing, trading, food and beverage, construction, and healthcare.

We focused our research on government databases and industry reports but most of the information was in Arabic, with no translation options available on the site. As such, we used information that was either published by the Egyptian government or supported by it. We used information from the OECD and several reports that were published by the Egyptian Central Bank. Unfortunately, we were not able to find information about the specific breakdown of the number of micro, small, and medium businesses in each category. The information for the breakdown of SMEs by industry was also from 2014 as we were not able to find a more recent breakdown.
Part
06
of twelve
Part
06

Small and medium-sized enterprises in Nigeria need many things in order to be successful over time. However, the most notable factors according to business owners in the country are access to finance, electricity, and reduced corruption in the government assistance programs set up to help them. These findings were determined based on data gathered by Enterprise Surveys, which is run by the World Bank Group. In this manner, the top obstacles rated by business owners in Nigeria were identified. From there, additional research studies and news articles from foundations were used to compliment the findings and further understand why these obstacles are so vital to business success in the nation. Below are insights related to each of these key needs, followed by data explaining why they are vital and the negative impacts that they have on Nigerian entrepreneurs.

Small and medium businesses need more lenient and available access to finance options, such as loans, grants, etc. so that they no longer rely on personal funds or savings.

SMEs in Nigeria need constant and reliable access to electricity so that their businesses can operate under normal standards and bring in revenue.

Although out of their hands, Nigerian small and medium businesses need to see reduced corruption in the types of programs that are set out to assist SMEs so that they can actually make use of the full range of assistance that is supposed to be available to them.
Part
07
of twelve
Part
07

Small and Medium Enterprises (SME) in Kenya are responsible for a considerable portion of the countries GDP. Yet several of the needs of SMEs are not being met. These include the lack of investment in the sector and the failure of banks to serve the needs of SMEs in a meaningful way. Both of these impact on the growth of these SMEs.

Need for Banks to Understand and Serve SMEs Better

Two key financial needs for small and medium enterprises in the United Arab Emirates are access to affordable lending and convenient credit cards.

VISA has partnered with various organizations and companies around the world to help SMEs flourish amidst the COVID-19 pandemic and other business challenges.

Visa's response to the COVID-19 crisis includes financial and technological support for its employees, clients, and communities. Some noteworthy measures taken by the company to fight the global pandemic include financial assistance of $210 million for women-led small businesses, commitment for no COVID-19-related layoffs, fee wavier for online payments, and COVID-19 Dispute Monitoring Program, among others.

SMEs in the Middle East

Small and Medium Enterprises comprise the majority of registered companies in the Middle East and North Africa region, and they account for approximately 50% of jobs in the area. However, they receive insufficient funding, with the lowest bank lending percentage worldwide and the highest financial gap. 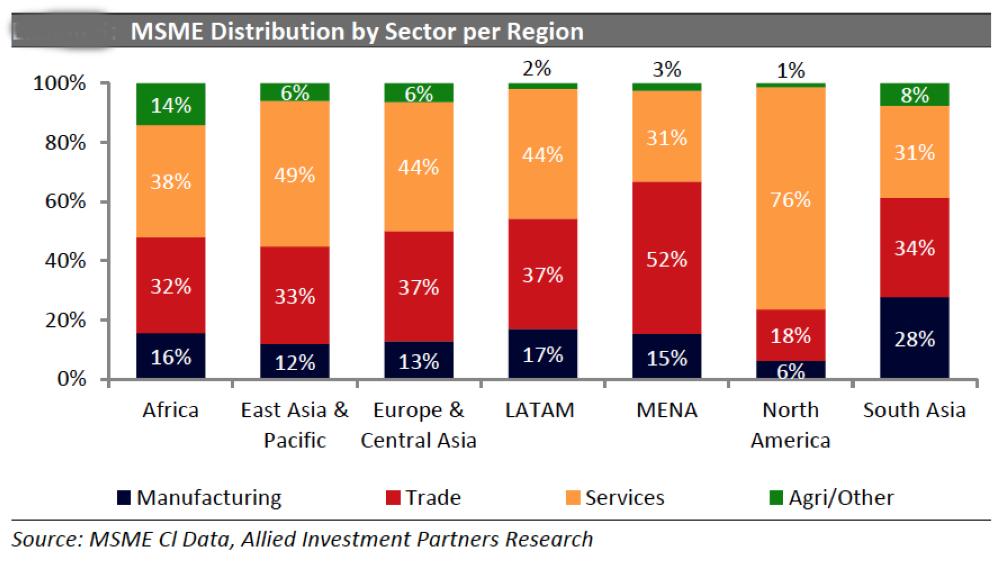 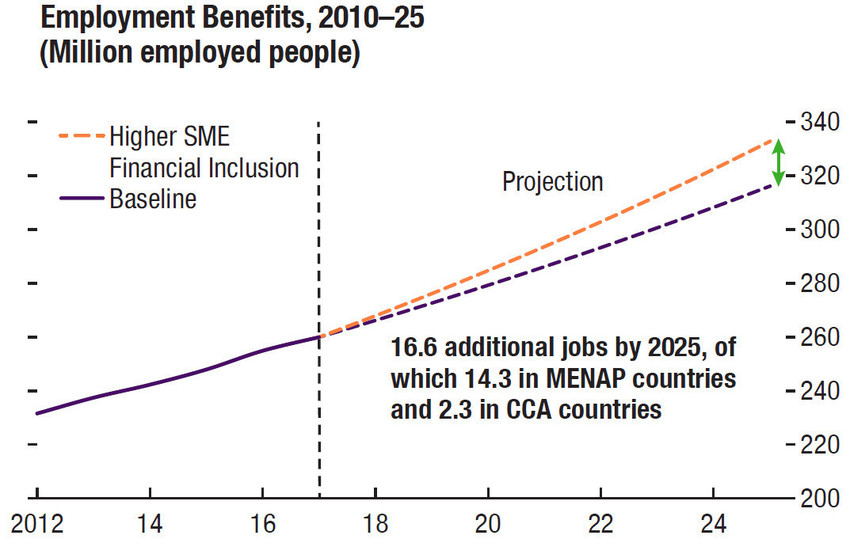 We searched through industry reports, reputable news sources, and international economic studies to identify information specific to the Middle East. However, we found that the vast majority of reports, studies, and news outlet refer to the position, influence, and general statistics about SMEs in the Middle East and North Africa region, which is why we have provided statistics for this region.
Sources
Sources

How can Egypt capitalize on its start-up boom?

The Impact of Exporting: Evidence from a Randomized Experiment in Egypt

A REPORT ON THE SMME OPPORTUNITY IN SOUTH AFRICA

UAE business permits total over 572,600 as investors move in

National Economic Register - The Official Portal of the UAE Government

Nigeria’s Small Businesses Want Government Help, But Corruption Is Draining It Away

Access to Financial Institutions Financing as an Instrument of Growing Small Businesses in Nigeria: An Empirical Study

Capital Funding: What Lenders and Equity Holders Give Businesses

Key Challenges for the “Missing Middle” in Kenya

Roadblocks To Innovation: UAE Small Businesses Sound Off On Working With Banks

SME market needs to focus on productivity, access to finance and sustainability

Why Banks in UAE are Reluctant to Finance Small Medium Enterprises

The best new financial products for SMEs in the UAE

Visa pours $210m into the coronavirus effort to help SMEs

ShopAppy.com partners with Visa to offer immediate support to SMEs to trade online

Visa is committed to our business and tackling the challenges ahead

Managing Disputes through COVID-19: Additional Information on Programs and Support

Fraudsters are getting smarter stay vigilant and protect your information

Visa to snap up stake in African fintech unicorn Interswitch

Poor access to finance is holding back businesses in MENA. This is how we can help them

Four Ways To Nurture Entrepreneurship In The Middle East