Research Outline: Metrics for Sequoia Capital
Part
01
of one
Part
01

One performance measure monitored by venture capital firms is the investment to exit ratio. A ratio of 1 means a venture capital firm is making one investment for every exit. For a venture capital fund to be successful, it needs to achieve a rate of 3x the investment to be considered a success ($100 million funds => 3x => $300 million return). A total value to paid-in-capital multiple (TVPI) is a metric that provides an estimate of return per dollar invested as a multiple, where a multiple of 2 signifies that for every dollar invested, the investor gets $2 in return.
After an exhaustive search, we have determined the data availability for Sequoia Capital is publicly limited, and restricts our ability to provide the average investments and exits the company has achieved over three years. Therefore, we have included data for the 7-month period November 2020 to May 2021. We have also provided industry data as a proxy for the average exit period, average failure rate, and average exit multiple (where publicly available). 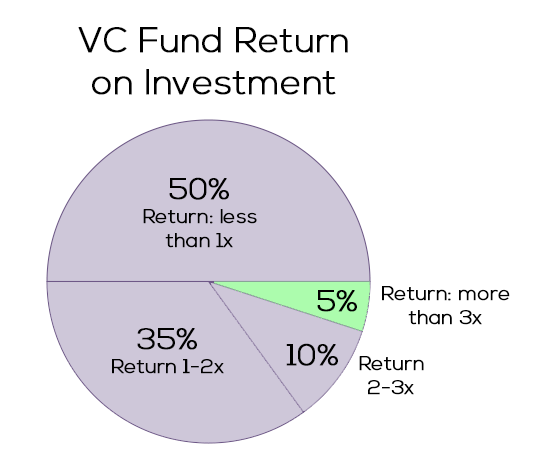 For this research on Sequoia Capital and the venture capital industry, we leveraged the most reputable sources of information that were available in the public domain, including Crunchbase, Pitchbook, Statista, TechCrunch, Entrepreneur Magazine, Venture Beat, Ian Hathaway, Business Insider, and company website. The limited data for Sequoia Capital's investments and exits was retrieved using the paywalled source, Crunchbase.

How Sequoia Capital’s $100 Million Bet on a Little-known Video-chat App Turned into a $2.3 Billion Venture Capital Grand Slam Because of the Coronavirus

Median Time from Initial VC Financing to IPO Exit in the U.S. 2019 | Statista

The Meeting that Showed Me the Truth About VCs – TechCrunch

Sequoia Capital is Wrong (and They Don't Get Work Tech)

What Return Do Venture Capitalists Expect?

These are the Top Venture Capital Firms of 2020

The Venture Capital Secret: 3 Out of 4 Start-Ups Fail