The total market for hay and forage production in Italy was valued at 1.9 billion euros in 2018. The requested data points on Italy have been entered into columns C — G, row 11 of the attached spreadsheet.

The country's total hay export is only available in monetary value. Based on our previous findings, it is possible to convert the monetary value of Italy's hay production to its corresponding value in metric tons.
Therefore, the total export is equivalent to (91.1 million/1.9 billion * 74.1 million tons) = 3.6 million metric tons.
Part
02
of eight
Part
02

Alfalfa is cultivated on nearly half (47%) of the forage agricultural area in Italy in 2012; Italy produces approximately a million metric tons of alfalfa annually. Production statistics for most other crops used to make hay were unavailable in the public domain. The findings have been populated in the attached spreadsheet.

We searched statistical databases such as the Food and Agriculture Organization (FAO, UN), European Commission Agri-food data portal/ Eurostat, Istituto Nazionale di Statista (Italian government's statistical database), Consiglio per la ricerca in agricoltura e l'analisi dell'economia agraria (the leading "Italian research organization dedicated to the agri-food supply chains"); industry portals like European Seed, EPPO; and websites of companies such as Gruppo Carli that deal in the production and trade of hay in Italy.
The FAO did not provide production data for hay or forage. It provided data on country-specific agricultural exports (trade data)--alfalfa features as one of the top exports for Italy. The Italian government databases did not provide a crop-specific breakup of production or acreage either. Also, we were unable to gather information from the Eurostat agricultural database as it did not publish the data in .xls format (the data is in .tsv format and it is unclear if it contains the required statistics).
While we did not find any statistics pertaining to the volume of production, we found dated (2012) statistics on the cultivated area for different types of forage. Given that there was no readily available statistic, we calculated the volume of production using acreage and yield, where available.
Part
03
of eight
Part
03

Hay stacking in Italy is highly mechanized and farmers are able to make round, uniform bales that weigh about 20-30 kilograms. Hay producer, Gruppo Carli, makes small bales which weight about 18 kilograms are made from carefully selected, dust-free dehydrated Italian rye grass. SO.PR.E.D., makes dehydrated alfalfa pellets that contain high amounts of pro-vitamin A, vegetable protein, beta carotene, calcium, phosphorus, and magnesium. According to SO.PR.E.D., the pellets provide good nutrition for cows, camels, sheep, and goats. Our findings have also been provided in the attached spreadsheet. 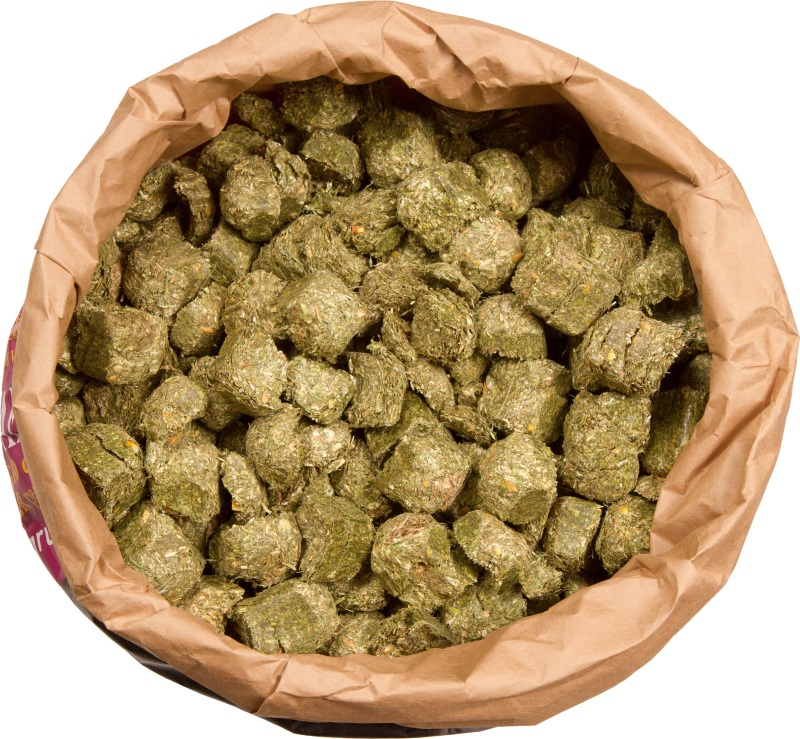 To determine the amount of hay produced that becomes large bales, small bales, round bales, pellets, and others, your research team made an in-depth study of reports by various players in Italy's hay industry, including hay producers, Italy's Ministry of Agriculture, and hay research firms. There was no publicly available quantitative data on this subject in all these reports and the team thinks this is because the players in Italy's hay industry have not conducted studies on the various hay products produced in this country. We decided to provide the qualitative data which we gathered from these reports.
Part
04
of eight
Part
04

Hay products have been proven to be extremely valuable to the diet of livestock animals, especially for animals in the dairy industry. According to different reports, hay products make between 50 and 90% of the diet of a cow because of their high nutritious value. The hay production market in Italy is highly segmented, which means that there are many players that produce hay in the country. While individual farms do produce a part of their hay themselves, the majority of hay production is still handled by commercial players like SO.PR.E.D and Grupo Carli. All the information has been included in row 11, columns AC to AG of the attached spreadsheet.

To find the amount of hay used in farms and the amount of hay produced by small and commercial companies, we focused our research on industry reports and government databases. Unfortunately, we were not able to find any reports that detailed the breakdown between the production of hay by small and commercial companies. It was, however, clear, that individual farms do have the capabilities to produce part of their own hay, but a specific percentage was not found. We also weren't able to confirm the specific percentage of hay that is used in farms, so we used the percentage that we found for Europe. However, reports have clearly confirmed that hay is the preferred nutritional product used for feeding livestock animals.
Part
05
of eight
Part
05

For this leg of the research, the same research strategy was used as that was used for Row 8, for France. Please see the request titled Hay Market Research: France, Part 5 for more details on this strategy. Please note that the same strategy was used as the same research obstacles were present for Italy as well. Please note, to access Statista sources after first viewing, clear Statista cookies from browser cache after first page viewing and refresh the page.
Part
06
of eight
Part
06

In Italy, quality hay must possess the following characteristics: good appearance, healthy, pleasant smell, right maturity, not too ripe, good leaves, slim, has no contaminants, and did not originate from low quality or harmful grass. Some of the players involved in the sale of hay products include herdsmen, farmers, measuring technicians, and commercial hay suppliers. The rest of the details were presented below and inputted in the shared spreadsheet, row 11, and under columns AO to AQ.
Part
07
of eight
Part
07

An overview of the hay market in Italy has been provided in row 11 and column AS of the attached spreadsheet. Some selected findings have also been provided below.

Kindly note that the research team had to depend on Google Translate for the bulk of this research because the resources addressing the subject matter were primarily in Italian.
Part
08
of eight
Part
08

We've provided an analysis of the strengths, weaknesses, opportunities, and threats for the hay market in Italy in the attached spreadsheet and below.

Production of Alfalfa Seed in Italy

Production of Alfalfa Seed in Italy

Number of horses in the EU by country 2018 | Statista

Getting a Family Cow … Lots to Consider

The rules of feeding your horse

Feeding Goats: What you need to know about forages and winter

How Much Hay Does a Guinea Pig Eat Per Day? - The Pet Supply Guy

Effects of drought on hay and feed grain prices

The good, bad, and ugly for hay exports