The shifts towards collecting as a form of investing and purchasing collectibles through digital channels are two trends that are currently reshaping how and why consumers engage with the global collectibles industry.

The emerging category of digital collectibles, alongside the more traditional collecting areas of sports memorabilia and animation products, are some of the largest and highest growth opportunities for collectors and sellers worldwide. 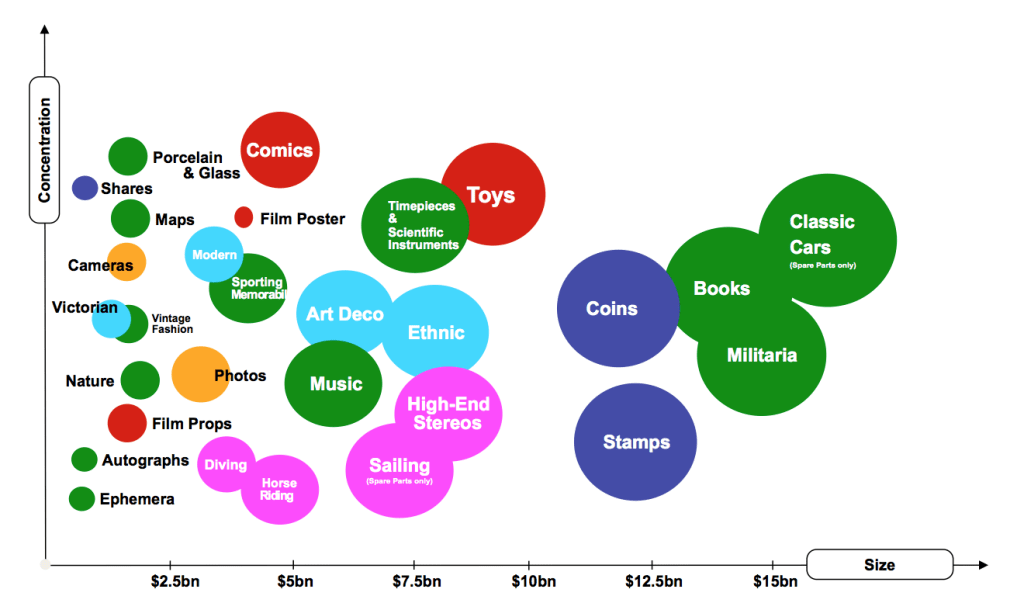 The collectibles market in China is currently valued at approximately $60.7 billion, and is likely to grow significantly for the foreseeable future.

Toys, famous liquors and national heritage art represent three booming collectibles categories in China. Notably, local consumer preferences for these and other collectibles categories range significantly from collecting as a form of investing to collecting as an expression of identity. Meanwhile, Poly International, China Guardian, Sotheby's and Christie's remain market leaders in selling collectibles across China, although eBay and other online sellers are adding new competition to an already fragmented dealers marketplace in the country.

Only the project owner can select the next research question.
Need related research? Let's launch your next project!
Sources
Sources
w

The Art and Collectibles Market

Are collectibles for collecting or investing? Advisors weigh in

8 Antique Investing Trends for the Next Decade - Antique Sage

The Future of the Antiques, Vintage and Collectibles Industry%page%%%

Unlocking a $200 Billion Dollar Collectibles Market on the Blockchain

The future of collectibles is digital – TechCrunch

The Value & History of Sports Memorabilia

Antiques and Collectibles: What to Consider Before Investing, Buying, or Selling

The Market for Sports Memorabilia Continues to Score Big

Spotting the Potential of NFTs in the Blockchain Gaming Industry

How Big are the Collectible Markets? Are we really spending $200 billion every year on them? - The hobbyDB Blog

Antiques and Collectibles: What to Consider Before Investing, Buying, or Selling

China’s art market Is booming – but not for foreigners