Strategies used by foundations to assess who receives a donation or grant include issuing challenge grants. Donor-Advised Funds (DAFs) mostly depend on the original donor to choose the charity that will receive the donation. However, they often propose options and resources like GuideStar to aid in the selection process. Meanwhile, family offices have different governance models, which influence the selection process in different ways. Employees of companies matching their donations usually can choose their preferred charity as long is it meets the guidelines established by the company. However, some corporations specify the charities they can select. Lastly, individual donors have different preferences dependent on age, gender, sexual orientation, and income. During their selection process they can use tools such as GiveWell and verify the accreditation of a charity as well as its impact. 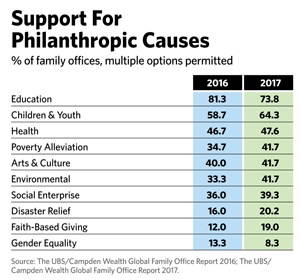 Only the project owner can select the next research question.
Need related research? Let's launch your next project!
Sources
Sources
d

How We Give – The Harry and Jeanette Weinberg Foundation

How to Attract and Engage Long-term Donors | Geneva Global

A transformative moment for philanthropy

What is a donor-advised fund?

JUST RELEASED: Special Report, The Data on Donor-Advised Funds: New Insights You Need to Know Raising Major Gifts Is Not Only Possible During a Pandemic, It’s Vital. Pandemic Reminds Us a Human-Centered Focus Remains Vital iWave’s Capital Campaign Guide: Back to Basics

The Foundation of Good Governance for Family Impact Investors: Removing Obstacles and Charting a Path to Action – NCFP

The Employee Benefit You Need To Factor Into Your Charitable Planning

Search Here to See if Your Employer Will Match Your Gift to BUILD!

5 Expert Tips For Deciding Which Charities to Support This Year

How to pick the best charities to donate to

Which Charity Will Do the Most Good with Your Donation? This Simple Tool Can Tell You.

How did we do in 2019? A preliminary look at our growth. - The GiveWell Blog