Insights on incidence, mortality, and the use of ablation in Atrial Fibrillation (AF) management have been provided in the research brief below. The research includes the racial disparities among blacks, whites, Asian, and Hispanic communities. 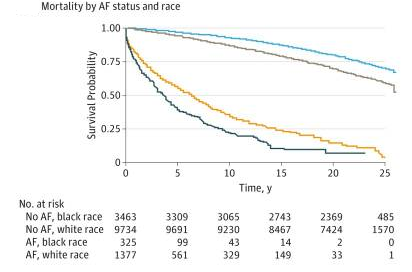 Minorities Have Less Prevalence of AF Compared to Whites

Among Latinx, Mexicans Have the Lowest Prevalence

RACIAL DISPARITIES IN THE USE OF ABLATION FOR ATRIAL FIBRILLATION

Increased Use of Catheter Ablation

Racial and Ethnic Differences in the Management of Atrial Fibrillation

Prevalence of atrial fibrillation and association with clinical, sociocultural, and ancestral correlates among Hispanic/Latinos: The Hispanic Community Health Study/Study of Latinos