We have curated information in order to provide an overview surrounding how consumers are reacting and interacting with telemedicine/teletriage technologies that connect them with veterinarians online. This has included, but not been limited to, data surrounding the factors that are driving consumers to this model, statistics surrounding the use of these technologies, any publicly available data surrounding who is most likely to use this kind of technology, and how COVID has affected this space.
Additionally, we have presented five best practices for veterinarians and animal care providers surrounding telemedicine in animal health. For each best practice we identified, we provided a description of the best practice, why it is a best practice, and found one definitive industry expert/thought leader discussing the best practice.
To round out this research, we have also provided an overview surrounding ten predictions from industry experts and/or thought leaders for the animal telemedicine and teletriage space. These predictions include, but are not limited to, predictions on growth, consumer technology adoption, and vet technology adoption.
All data presented was either global, with an emphasis on North America when we could present that, or in the case of the best practices, not applicable. 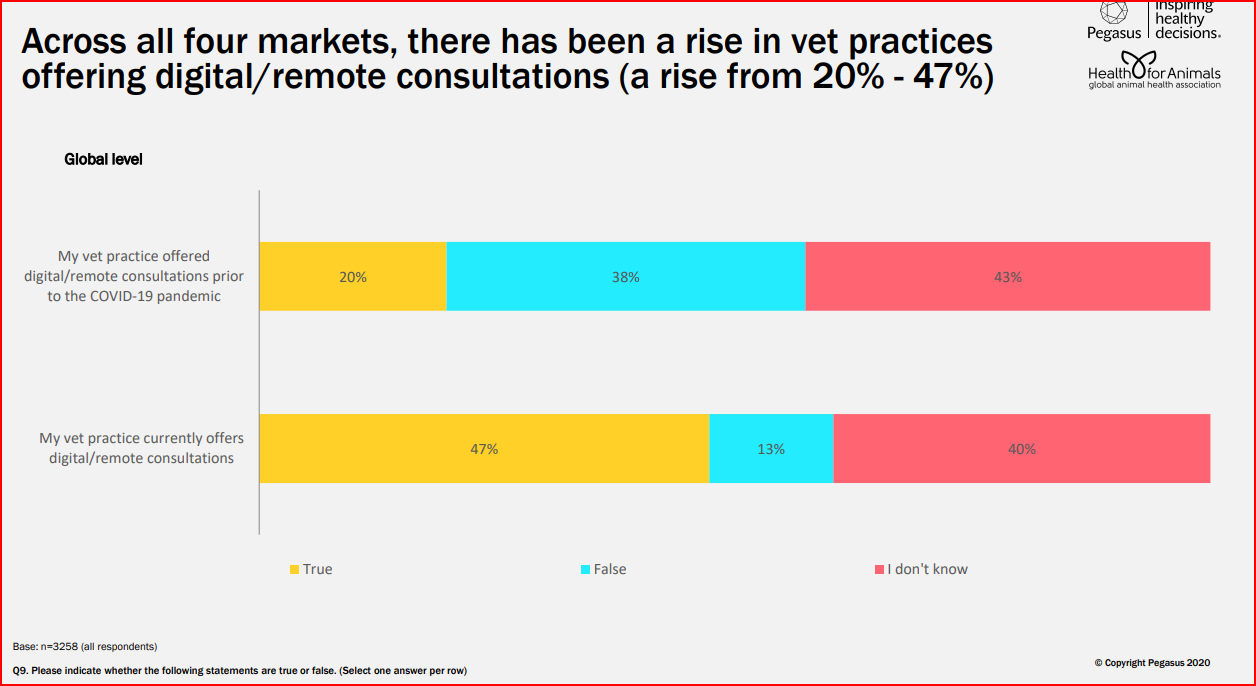 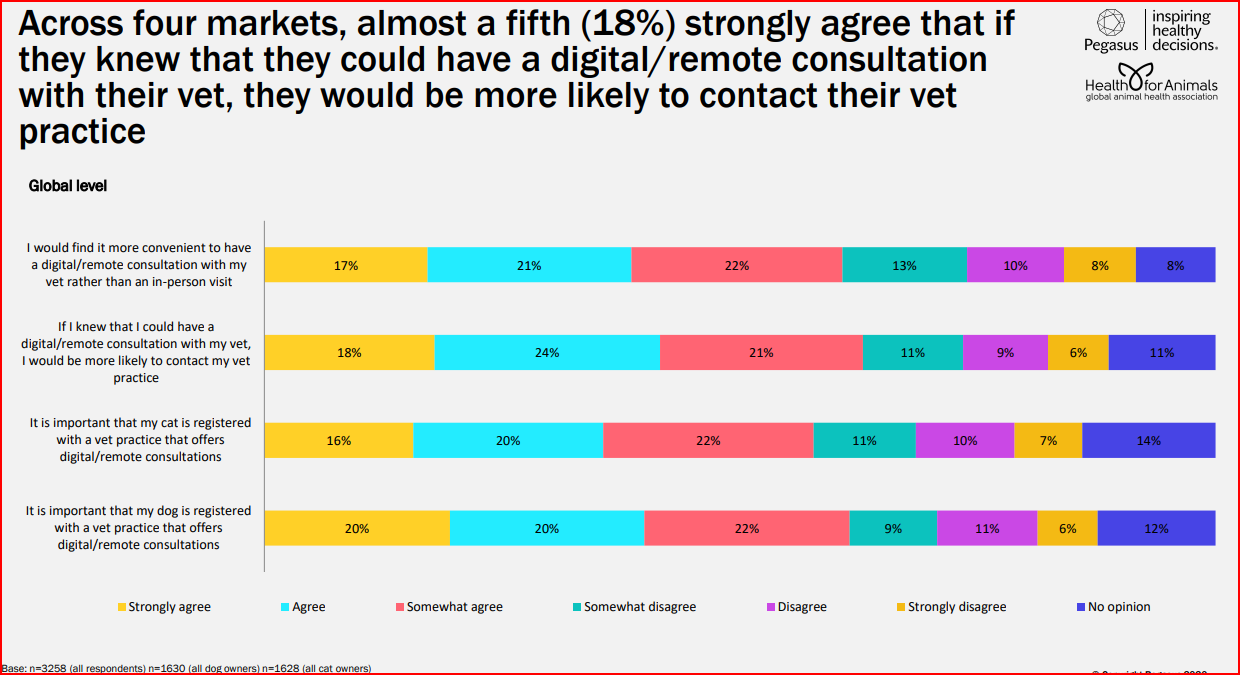 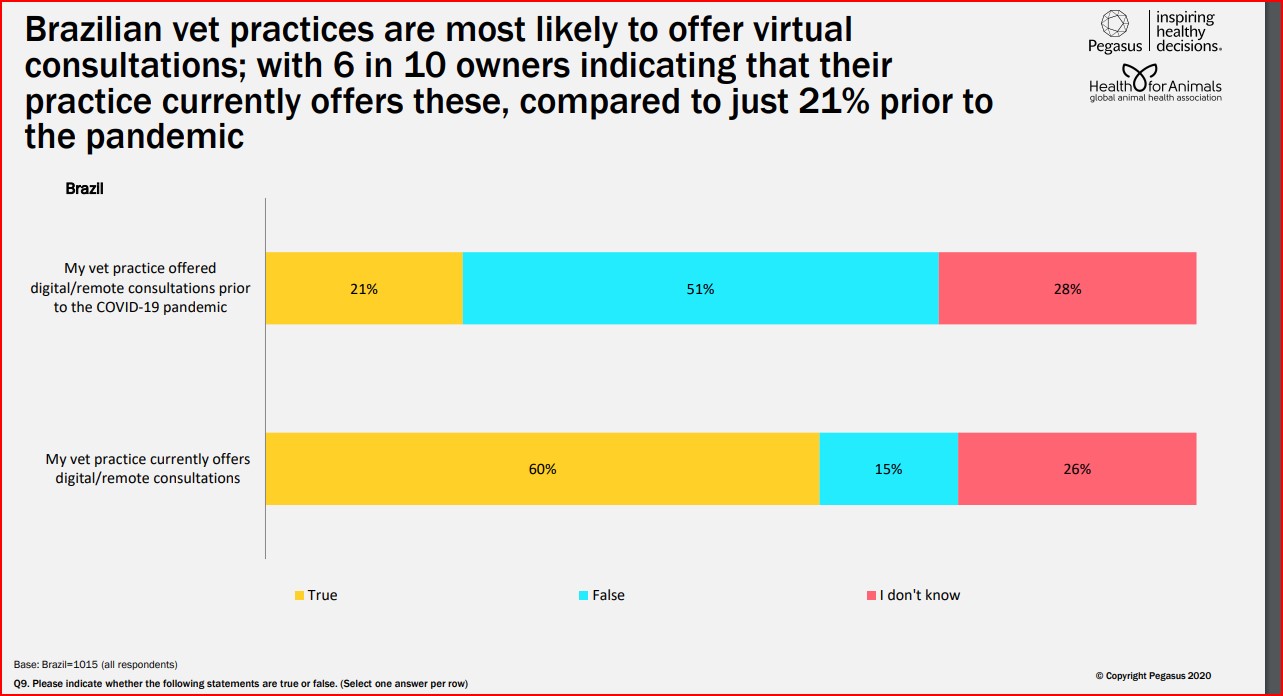 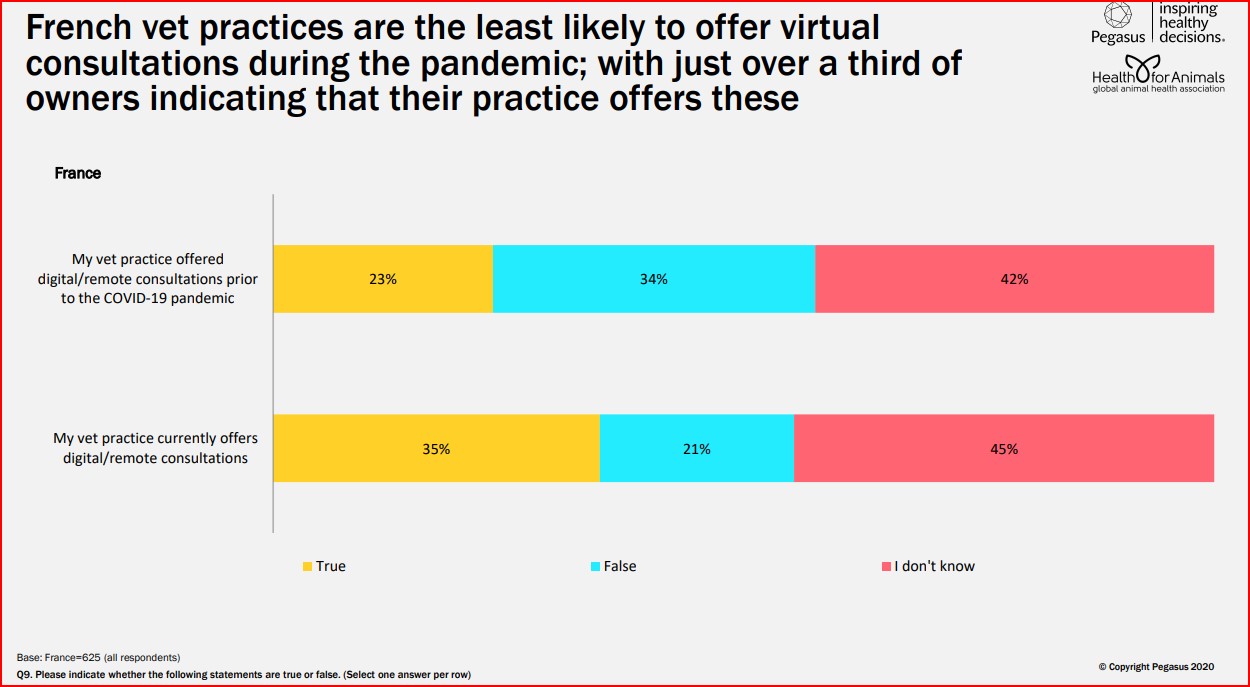 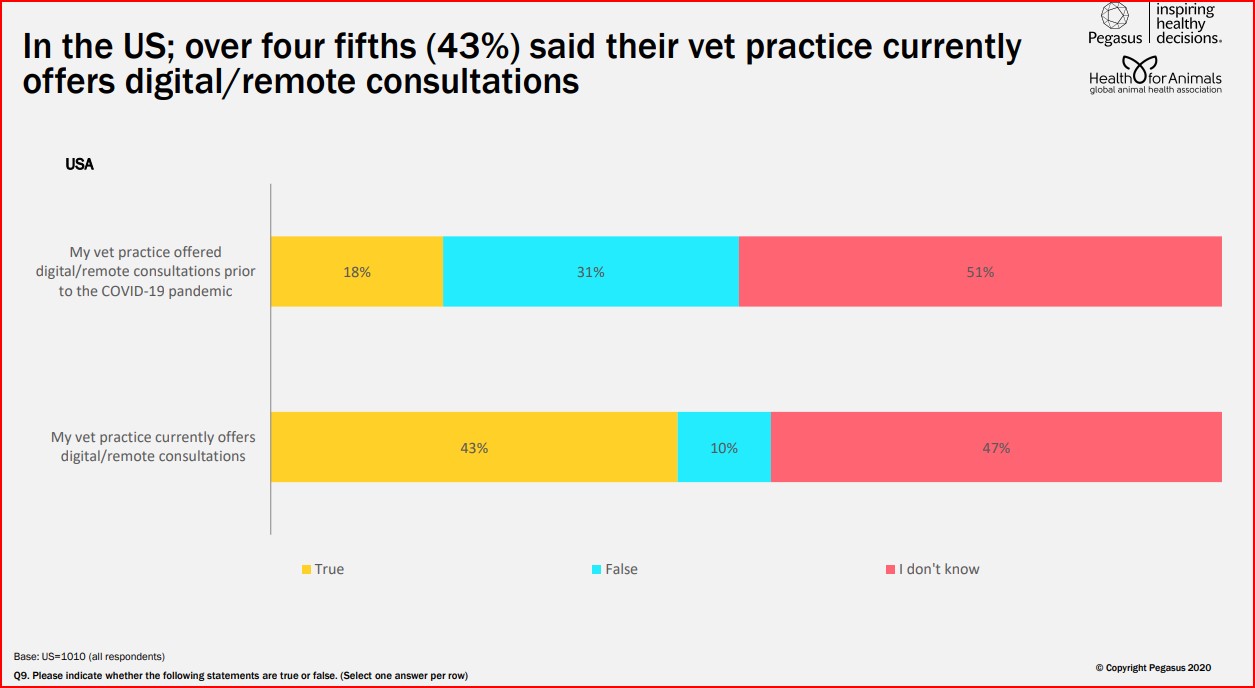 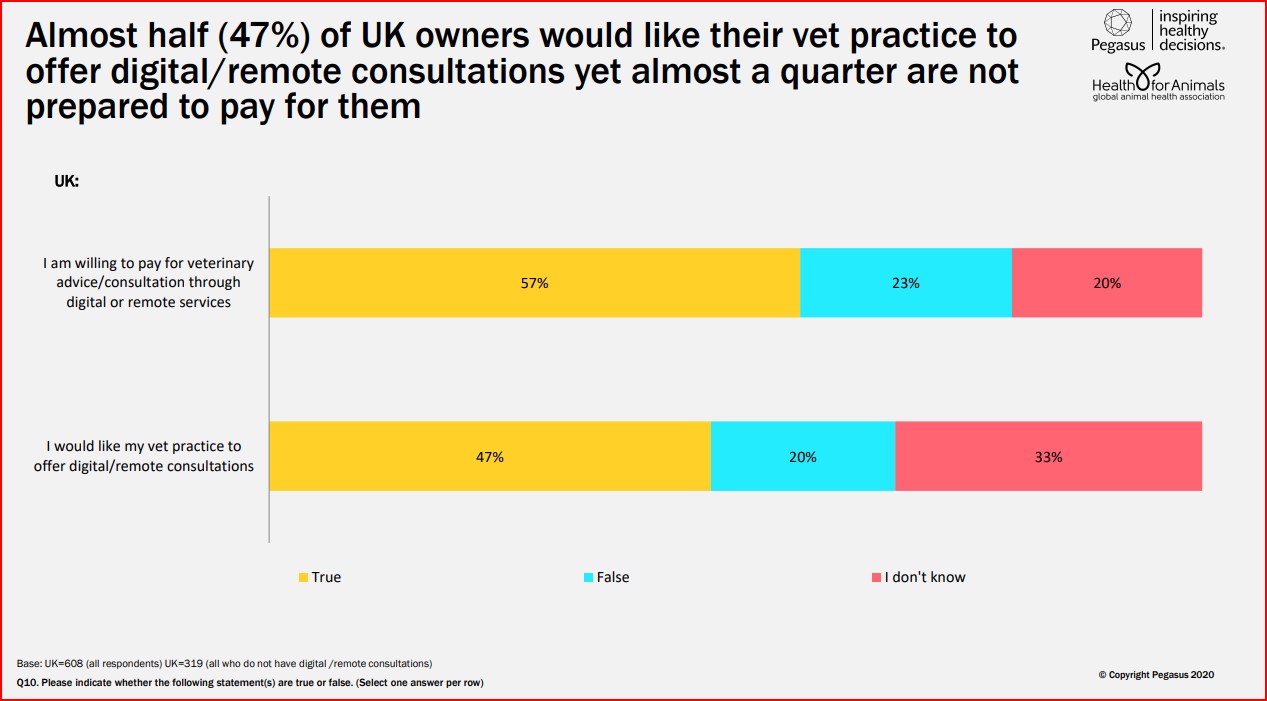 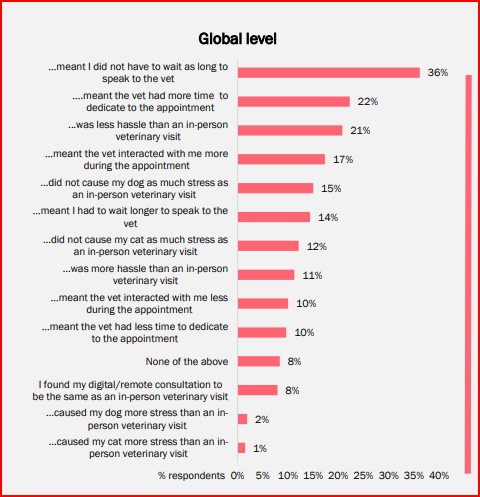 According to Today's Veterinary Practice, there are five best practices for veterinarians to consider when implementing Telemedicine. According to their website, Today’s Veterinary Practice is the "trusted source for peer-reviewed clinical information in veterinary medicine." They state that their goal is to "enhance knowledge and encourage confidence, inspiring the highest quality of veterinary care." After reviewing other sources, it was deemed that this was the most credible and reliable source to pull this part of the research from, with other sources being 3rd party blogs that were promoting their own telemedicine software and/or telehealth services. Today's Veterinary Practice is being considered and presented as the industry expert and/or thought leader discussing the best practice.

For this research on the use of telemedicine and teletriage solutions in animal health, we leveraged the most reputable sources of information that were available in the public domain, including the FDA and the AVMA, as well as reputable and credible sources such as The New York Times, Health for Animals, Pet Products News, USA Today, Kisaco Research, and Civic Science.

Only the project owner can select the next research question.
Need related research? Let's launch your next project!
Sources
Sources
h

These Factors Are Driving the Rapid Growth of Online Pet Care

You may have to wait longer for a vet appointment during the pandemic. Here’s why.

Pet Care in the Age of Telehealth (Part II)

Telehealth goes to the dogs

Using telemedicine to help care for veterinary patients during COVID-19

How To Appeal To Millennials

Would you book your next vet visit over video chat? | CBC News

The Zoundz of music

How Millennials are Changing the Canadian Pet Market - StreetDog Marketing

Could the webcam be an eye to the future of veterinary medicine?

The Future of Pet Care

Amplifying the Voice of the Veterinary Community 2020

Telemedicine Emerges as a Care Option for Veterinary Patients

Telemedicine for Veterinary: the Essence and Use Cases

11 Jan 2020 Implementing Telemedicine in Your Veterinary Practice? Here’s Everything You Need to Know