When companies make statements about their diversity and inclusion, they must be careful. With this being such a hot topic, words without action will be met with disapproval. Statements that do not match how the company actually behaves will open up the social media floodgates and results in comments that dissect every action the company has ever taken. The winners in this discussion are companies that think before they speak. They do not try to recreate the wheel, but instead find meaningful ways to be part of the conversation. The companies that take big stances and make big statements have had a history of being activists.
Finding positive responses to statements was the most challenging. Almost every statement by a company has negative reactions, as this is the way social media functions. There are very few companies that have made a statement and received a massive positive response. There are simply too many armchair, social justice warriors on social media. Ben & Jerry's would be one of the few exceptions to this rule.

Ben & Jerry's Ice Cream- A History of Speaking Up

Sephora- Finding Worthwhile Initiatives Instead of Creating Them

The Entertainment Industry in Response to BLM

IBM- Rethinking Products & How They Effect Others

Uber- Message Gets Lost in Stream of Complaints

McDonald's- Words That Do Not Match Actions 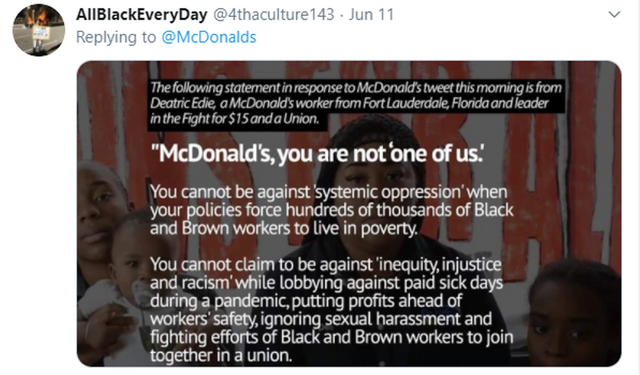 State of Diversity and Inclusion in U.S. Tech

The importance of diversity and inclusion in the luxury world | OMD

How to Do Diverse and Inclusive Content Marketing That Matters

“Woke-Washing” Your Company Won’t Cut It

Brand-Businesses Must Adopt A.B. Carroll’s Four Dimensions Of Corporate Responsibility As A Framework For Accountability To Society