Early Findings: Churches in the United States: Redevelopment...
Part
01
of one
Part
01

At one time, in the not so distant past, church organizations felt they needed a church in every neighborhood if they were to best serve their members, Church organizations invested heavily in properties to build and develop their churches. Unfortunately, in the last half century attendance at church has fallen, and congregation numbers dwindled. As a result, church organizations face the economic burden of maintaining these properties, which, given the prime location of many churches, is becoming increasingly more difficult. To combat this, churches have looked to redevelop their sites, in a way that is consistent with their overall mission.
The case studies identified, each had challenges to overcome in the development process. Each of the cases has been chosen because it addresses a different aspect in church redevelopment. The First Unitarian Church of Oakland, CA is included as an example of the benefits that can be gained through working with a partner. For Seattle's First Methodist Church, legal action was needed to be address the historical status aspect of the project and the engagement of the right people ultimately meant an outcome benefiting all parties prevailed. Continuing to engage the former parish members and the wider community was instrumental in the development of St Aidan's in Brookline, Massachusetts, while Sacred Heart in Augusta is a shining example of redevelopment without changing the character of the buildings themselves. Finally, 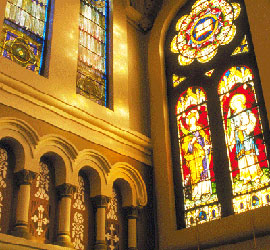 Only the project owner can select the next research path.
Need related research? Let's launch your next project!
Sources
Sources
d

Houses of God… or not?! Approaches to the Adaptive Reuse of Churches in Germany and the United States

Convert! The Adaptive Reuse of Churches

After more than a decade, St. Aidan’s conversion to housing in Brookline complete