An overview of the fleet market size in UAE, specifically the number of vehicles in the country, and the available information related to the regional fleet sizes has been presented below.
NUMBER OF VEHICLES IN UAE 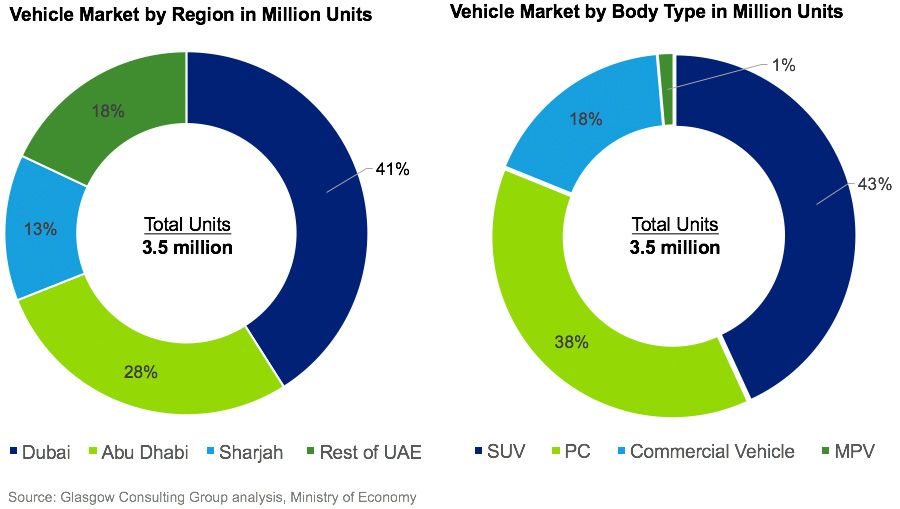 Source
Number of Vehicles by Region

Number of Vehicles by Type

RESEARCH STRATEGY
While we were able to identify the total number of vehicles in the UAE, finding the number of fleets in the country was not as straight forward. After an extensive search through fleet/automotive industry research articles, news, and media sources, it was concluded that this information was not available in the public domain. Also, there was no clear statistics on the number of companies that own vehicle fleets in the UAE, or the average number of vehicles owned per fleet company in order to calculate an estimate.
From our research, we found that fleet companies such as car leasing and taxi companies are leading car sales volumes in the UAE. Therefore, we focused on the taxi fleets and the car rental and leasing market to identify a total market size. (Note: this was also based on the examples of fleet companies provided prior to this research such as Dubai taxi fleet, Sharjah taxi fleet, Airport taxi, and Careem). We were able to provide figures of the taxi fleet size (total) for only 5 out of the 7 Emirates; Dubai, Abu Dhabi, Sharjah, Ajman, and Ras Ras Al Khaimah due to information limitations. In addition, since the fleet sizes of several regions were based on outdated information, we provided an estimate for the country using the data for Dubai and its 41% overall vehicle market share. We also provided companies that use these taxi fleets (franchise taxi companies) as available, and the type of services provided by these companies as a proxy for vehicle types since this information was not available publicly.

Developing a Comprehensive Taxi Strategy for Dubai: Based on System Analysis & Structured Assessment

Sharjah Taxi announces installation of surveillance cameras in its fleet

How many taxis are there in Abu Dhabi?

Here’s Why Uber Is Facing Pressure in Dubai

Taxis in Ras Al Khaimah to be eco-friendly by 2024